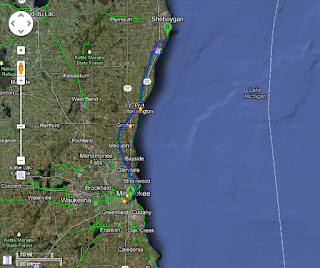 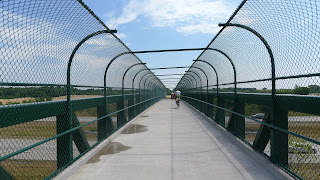 Anton, Steve, Andy and I hit the road last Saturday morning, bright eyed and bushy tailed, ready for the road ahead.  Before leaving Anton's house we discussed our route options; because of the direction we were heading there were many for us to choose from.  We chose the bike path out of the city and zig zagged our way through the burbs a bit, until we hit the country where we chose roads closest to the lake. 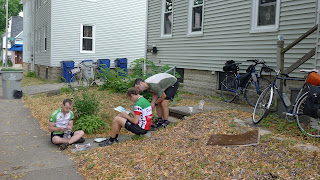 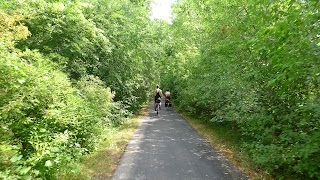 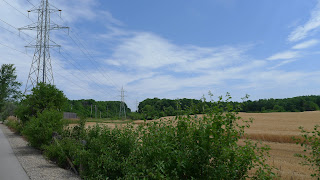 Later we arrived in Port Washington where there was a necessary stop at Bernie's Fine Meats.  If you are ever in the area, you need to stop there and pick up some of the best jerky your taste buds will ever have.  Before continuing on, we hung out in the shade at the marina park, with cider and jerky in hand. 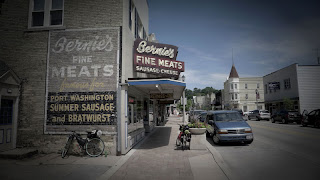 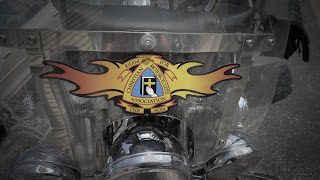 We stopped at Lake Church Inn, in the town of Belgium, for lunch and beers. Talked to some very friendly folks for a while, which is to be expected because we're in Wisconsin after all!  Some of the locals mentioned a few times a place called the "Top Hat", but we never did make it there. 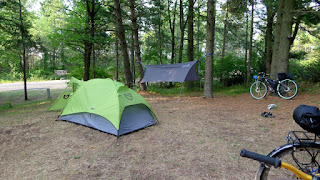 Finally, we arrived at Kolher-Andrae State Park after stopping at a local grocery store, fully stocked with food, ice, beers and ready to cool off in the lake. Hammock camping is my new preferred method when the weather permits; but if it drops to the 40's I'm inside a tent. A big thank you to ranger Ken who upgraded our site, he informed us that it's his favorite site in the park.  We later discovered that the morning sun, the crashing waves at night, and being wrist rocket distance away from the lake were a few of the reasons why our site was the best.  Also, just across the road was the trail head to the sand dune trail.  The previous one we were assigned to was simply inadequate for 2 hammocks and was basically on a giant ant hill. 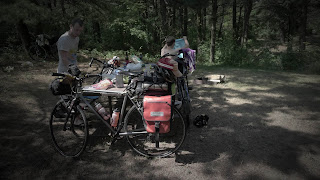 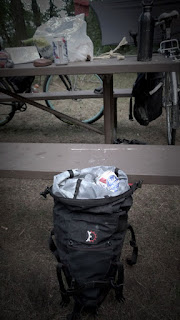 Soon after are arrival to campsite #2 we were turning the Revelate Viscacha saddle bag into a home made cooler.  We listened to Bob Uecker announcing the Brew Crew with Anton's handy am/fm radio, while doing 12oz curls around the fire. 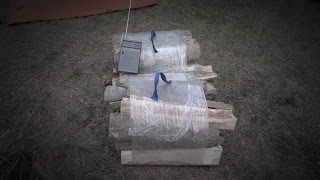 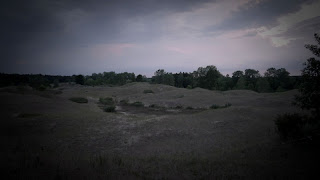 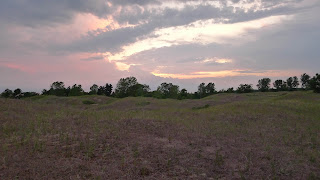 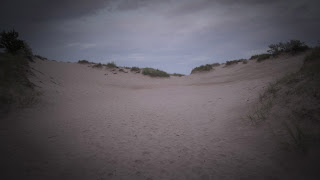 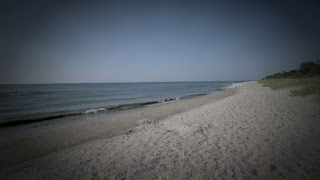 After a good night and kind of relaxing morning we were turning and burning back home.

Notable moments:  Andy ran over my banana that fell while riding(no he did not wipe out), Andy dropped the map while going down a hill at 35mph+ and Steve not telling anyone until we were at the bottom of the hill. Steve taking a bum bath at the fish cleaning station, Andy getting stung by a bee, and one flat tire 10 minutes from home.  All and all it was yet another successful weekend get-a-way from the city with some of the best buds around.

That sounds like a great trip! The husband and I are talking about buying a little trailer and doing the same thing soon! Sounds like a beautiful area...

What was your total mileage? (We're north of you just east of Lake Winnebago, but I was just curious.)