A jet plane and a big idea.

Spring is trying to sprung. The sun is still up by the time we’re closin’ up shop and the temps are regularly above freezing during the day. Cool. I’ve taken it easy the last few weeks because my esteemed colleague Earl has been up to some exciting stuff and has been posting about it like our favorite Brooklyn based architect. And while PINP, BbBbbbBb. So there. Song from two weeks ago brought to you by our fearless leader. Bam. Um. Song of last week from the man in black. Bam. Never mind his jacket. Playing ketchup here. I built a new bike. Fun. It’s the latest 650b mountain bike. 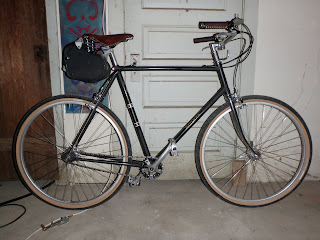 Sweet huh? It’s a Raleigh Sport, no big deal. British three speed might be my favorite bikes. I gave it a real low gear ratio so I can do some ATBing with it. At least until it breaks.

Some product plugs from the build. Nitto 302AA bars. A teeny Technomic 50. Some PDW Dapper Dan grips. Tektro long reach brakes. Brooks B67. Wanna know why that saddle is cool? Too bad, I’m gunna tell you. It is wide, sprung and it is single railed (easy to use with current seatposts). Sheldon knows best.

” Until the 1970s bike boom, virtually all bicycle saddles had springs. The only cyclists who rode un-sprung saddles were hard-core, high-intensity riders. These cyclists carried such a large proportion of their body weight on their legs that they didn't need springs in their saddles, and they were weight-concious enough to begrudge the weight of the springs. Sporty cylcists also preferred unsprung saddles because they made it easier to pedal rapid cadences without bouncing.

When the bike boom struck, and everybody in America bought a racing-style drop-bar ten speed, the unsprung saddle was part of the deal. Unfortunately, neither the un-sprung saddle, the drop handlebars, nor the narrow tires suited the needs of the more casual, "recreational" cyclist.

The mountain bike revolution was a movement away from the drop bar and the narrow tire, but the unsprung saddle remained. Since the mountain bike came with big fat squishy tires, the tire was able to provide enough shock-absorbency to make the bikes reasonably comfortable to ride. Unfortunately, those same tires also made the bikes slow and hard to pedal.

Despite fashion, I believe that saddles with built-in springs make a great deal of sense for most cyclists, who favor a fairly upright riding position which puts more of the rider's weight on the saddle. “

Let’s see, there is some other things on the rig that we don’t stock, but I think are neat so you have to hear about them. Like the firm grip of death on Martha the passenger pigeon, Russell the Muscle snapped up two of the last Sun CR-18s in the 650b bead seat diameterway. To which I attached a bitchin’ scavenged alloy shell Sturmey-Archer AW and Panaracer/Rivendell Fatty Rumpkins. 650b is cool on a bike like this because it is nearly the same size as the original 26x1-3/8” that these bikes were equipped with.

If you are in the “the good land” this evening members of the BC/MBC community in the band Hyena Hyena and Scrimshaw are playing down the Frank’s Power Plant. Check it oot.

I'm going to see iffn I can add some blogs to the blogroll, too. The Beatles Complete on Ukulele. Its a good weekly read if you're into that sort of thing. They produce a uke version of a Beatles song and do a little write up...weekly until the 2012 London Olympics. I'll throw up Muzzle of Bees which I mentioned in a previous post, as well.

Song of the week is by the Avett Brothers. They are my British three speed of music. They are going to be playing a show at the Riverside Theater tomorrow. I proved to be incompetent in ordering tickets before they sell out but my determined and vigilant (and lovely) cohort was able to wrangle up a pair of tickets. This'll be fun..uhh...Bam.

Go to bed or giggle (but not for real).

P.S. I don’t mean to make light of the extermination of a species and over exploitation of natural resources, but I like to throw in a little WI oriented educational material.