I've been riding the Stumpie hardtail (alloy version) for a few years and love the responsiveness.

DURANGO, Colorado (VN) — The venerable Specialized Epic full-suspension XC bike is getting a facelift for 2014. A complete frame redesign is on tap for the bike, which will only be available as a 29er, and for the first time ever, Specialized will offer two distinct frame lines under the Epic headline.
The Epic was the first full-suspension bike to win a world championship under Burry Stander. Last season, Yaroslav Kuhlavy piloted the Epic 29er to World Cup wins as well as Olympic gold, again, two firsts for a full-suspension 29er. 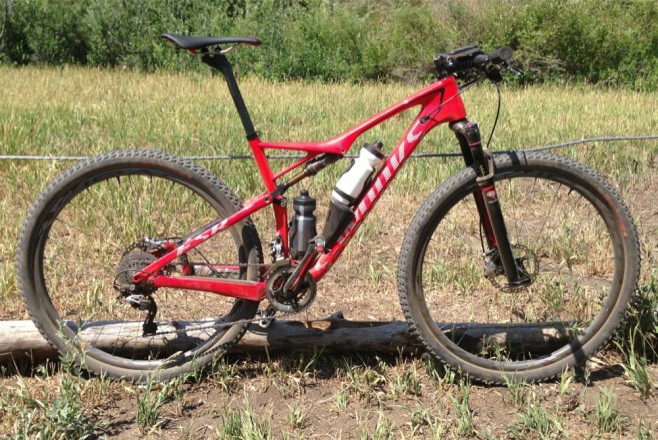 The Epic has long been a single-frame design with a variety of builds and frame materials being offered. For 2014, Specialized will offer two frame designs: the classic 100mm travel Epic and the new 95mm, single-front-ring drivetrain specific, World Cup (WC).
In essence, riders will now have a choice: the standard Epic, similar in design intention to the one currently on the market, or a stripped-out, race-day version.
The bottom bracket of the 95-mm World Cup bikes is 2mm higher, the chainstays are 9mm shorter, and the headtube is a half a degree steeper when compared to the standard Epic, which carries over a nearly identical geometry from the 2013 Epic.
The World Cup offers an extremely aggressive platform. The chainstays are nearly a centimeter shorter, making the bike feel compact and whippy. The seat stays are the same length as the standard Epic, as the 5mm reduction in travel allowed frame designers to recycle those.
The steeper headtube of the WC paired with 5mm reduction in travel of the Rock Shox Sid World Cup makes the front end feel much more aggressive. Specialized claims that both models of the Epic are stiffer than the current model. The increased front-end stiffness could be easily attributed to the new wheels or the 15mm thru-axle that Specialized has finally come around to stocking on its cross-country bikes.

As always with the Epic, every model comes equipped with a Fox shock and Brain inertia valve, which firms up the suspension when it is not needed — on smooth trails, or when climbing, for example. The Brain is relatively unchanged, though it is supposed to have a smoother opening action from the firm setting. Additionally, there are now only five positions, making it easier for riders to tune it to match the RockShox Sid fork with Mini Brain that is spec’d on every model, save the entry level Comp.
The S-Works carbon framed models (both the 95mm and 100mm versions) come equipped with Kashima coated Fox shocks, RockShox Sid World Cups, and Roval SL 29 wheels, making for extremely lightweight, and expensive builds. However, the best balance between build specs and price will be the Marathon, which comes with slightly heavier Roval carbon wheels, SRAM XO, and Magura MT6 stoppers. The Marathon build is only available in the 100mm-travel frame version.
The World Cup will be available in two builds, an S-Works equipped with SRAM XX1, a custom 95mm RockShox Sid World Cup. The Epic Expert WC will be offered with XO1, a RockShox Sid, and Roval carbon 29er wheels. The S-Works WC will also be available in a frameset.
The standard, 100mm version of the frame will be available in S-Works, Expert, Marathon, and Comp builds, spanning a price range of $10,500 to $3,300. The S-Works will use the same 11m carbon as the World Cup model of the same name, while the Marathon and Comp will use lower-grade carbon and the Comp has an aluminum rear triangle.

Until now, carrying two bottles on most full-suspension bikes has been impossible, at least without getting bottles caked in dirt under the down tube or on the back of the seatpost. Riders had to retrofit their bikes in order to carry enough water and tools for an all day adventure; that is, without carrying a pack or stuffing jersey pockets.
The engineering team at Specialized, headed up by Eric Schuda, sought to make the rider’s life easier. The result is what the company is calling SWAT (Storage, Water, Air, and Tools). The SWAT system took three years to engineer, a full year longer than the new Epic took.
The SWAT system, which mounts at the bottle cage using an extra mount bolt on the frame, allows for the use of two water bottles and hides away a multi tool, CO2 canister, and has storage space for a tube. It’s all tucked neatly into the frame.
The first step was to fit two bottle cages inside the front triangle of the Epic, a goal achieved by tucking the custom Fox shock into the top tube and moving the new concentric pivot — like that of the Specialized Camber from last year — higher up the seat tube.
The new shock placement also acts as a storage point for the SWAT multitool. The multi tool has bits for everything a rider should want, including a specially machined 8mm driver for pedals that still fits in the tool without being too bulky. The multitool pulls double-duty as the driver piece for the chain tool, which is integrated into the top cap, along with a spare masterlink.
The World Cup frame will not come standard with the SWAT kit, but the standard 100mm S-Works, Marathon, and Expert carbon models all come equipped with the system.
The SWAT kit can only be used on SWAT Level 3 prepped frames, or frames which have an extra bottle cage bolt on the downtube. As of now, only the Epic, Epic WC, and Stumpjumper are Level 3 bikes.

I was fortunate to get time on both the S-Works as well as the S-Works World Cup. The S-Works was extremely similar in both build and ride to the model that we reviewed in our cross-country bike VeloLab. The new Brain, with its fewer clicks, did make for a much quicker setup and quickly gave me a middle that was perfect for all-day riding, but when I knew we were about to hit the last descent of the day, I could quickly open the valve. Not being able to make those Brain adjustments on the fly remains a drawback of the Brain compared to other bikes’ remote lock-outs. But most of the time the Brain is great to set and forget.
The World Cup was the standout for me. The Brain of the WC is tuned to be firmer, though not overly so and again has the same five settings as the standard S-Works. Overall, the WC is noticeably more aggressive in both handling and gearing choice. The World Cup is intended for exactly what its named; fast World Cup racing. It’s not a bike for the every-day rider, but perfect for someone looking to upgrade from a hardtail to a full-suspension race bike.
The World Cup was downright impressive on the trail. The 95mm of travel was perfect on every trail we took it in Durango. Surely on more technical descents, the 95mm could be a bit on the short side, but the low weight — our model with pedals and cages was about 21lbs — makes this bike easy to throw around under foot.
For my intentions, racing everything from short tracks to doing some big miles in the high country, the WC is an amazing weapon. The Expert model with XO1 will save buyer’s some coin, and still give riders plenty of room to shed more weight from the wheels and components.
Posted by Paul Warloski at July 25, 2013