So maybe a lil late to talk about this last weekend but here...fellow Ben's employee Jim and I as well as Lakefront Brewery brew slinger Colin did a bit of snow riding out in the neighboring Tosa trails. It was my first time snow riding and boy gotta tell ya, a little difficult without a Pugsley when the snow is packed in. We have Innova Spyders as well as Surly Larry's in stock and damn are they huge!

After about six 10 min loops, the trail was packed and we were all whippin through it all! Too much fun, maybe not as fun as an N64. Yikes. Also, if you live in Wisconsin and you haven't yet, take a hike or ride some trails in the woods. We've got a beautiful State. Mmmm, warm fuzzies. 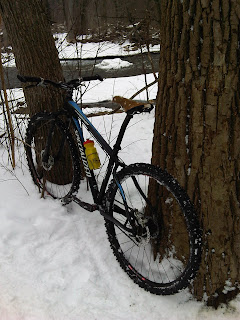 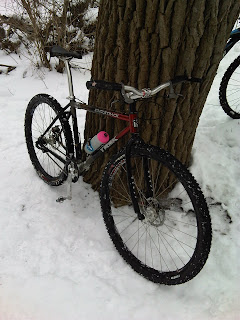 The wierd thing I call my mountain bike
At the end of the evening we all headed to the MKE Bike Polo Poker Pub Crawl. I was lame and only hit up the last spot where I was expecting only a few raggedy polo kids drinking beer. But instead, the Irish Pub was packed! It was so great to see a whole mess of people from all corners of the bike industry support such a noble crew. A few beers in me and I was feeling great.

Dear Milwaukee, even though you have big potholes and crappy drivers, you have a lot of amazing people and I love you. There I said it. Bravo to those who set it up and all those who donated prizes. I lost on the tatto prize, well, that's what I get for buying one damn ticket. Plus... 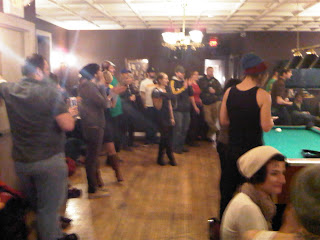 Best Picture Ever, I'm a pro