Teresa Rocks Her First Tri on a Ben's Bike

When Teresa came to us a few months ago to rent a bike, she had never done a triathlon before. Nor had she ridden much.

So we've been excited to tag along for her training and watch her fitness and bike skills improve. She rented a Specialized Dolce from us, a bike that many triathletes use since it is light, fast, and fairly inexpensive.

Last weekend, she finished the Pewaukee Sprint Triathlon, pleased with both her placing and the progress she made in how fast she rode the bike. We're so proud of her and her accomplishment, and we are thrilled to be a part of the journey! 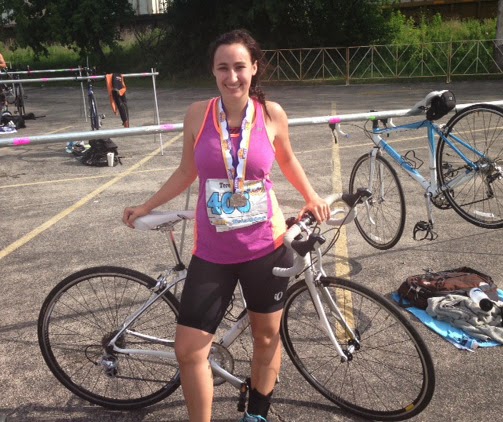 
Pre Race: I got to the race around 5:30 am and set up my transition area. Everyone got enough space to rack their bike and lay out their towels and gear. Once I was all set up, I got my body marked with my race number,  then I jumped in the lake and swam around a little bit.

Swim: 400 meters
Athletes were released in pairs every three seconds which was a really good way to keep the flow of people steady. I kept to the outside with the other slow-pokes to avoid others swimming over me. It was really wavy, which made me slower and made breathing difficult (I swallowed about a gallon of lake water), but other than that, it was great! I was pretty tired afterwards, but I ran back to my transition area in preparation for the bike.

The run from the beach to the transition area felt really far. When I finally got there, I had to wrap my ankle (I sprained it the week before), then I grabbed all my bike stuff and ran to the bike start. As soon as I hopped on my bike, my water bottle flew off. Though I really wanted to drink that water, I didn't bother chasing after it because I would have caused a collision with all the bikers coming out of transition. Off I went.

Bike: 17 miles
I was so happy to be on my bike. I felt most excited for this part of the race, until I turned out of transition and saw the first long hill that was greeting me. I didn't ride the course before the race, and although I heard it was hilly, I didn't expect quite so many hills. I slowly pedaled up each hill, and then I had a great time going down each one. Although many riders passed me, a lot of them chatted with me as they passed, which made being passed stink a little less!

Second Transition
I must have been feeling really confident when I finished the bike course, because when I got to the transition area I dismounted while riding. That was a fancy maneuver for me that I had never tried before. I am not sure how I didn't crashI Anyway, the second transition was quick, I was wearing my running shoes already so I just had to rack my bike and grab my iPod.

Run: 3.1 miles
The run felt mostly flat. I think I really would have liked it if I didn't have a sprained ankle. At 1.5 miles they had water which was really welcome because the sun was pretty bright at this point. There were two huge uphills in the last half mile, but then you got to run downhill to the finish line which made me feel like a champion, and also made for a very badass looking finishing photo (look at me go!)

I completed my goal of doing a triathlon! Finishing felt great, and a year ago, I never would have thought I'd be able to do it. I think that signing up for something like this is a great way to keep yourself focused as far as working out goes, and there are triathlon training plans for all levels of fitness.

For me it also introduced me to cycling, a sport that I may never have tried out had I not signed up for the triathlon. I really liked the sprint distance triathlon, and I definitely plan to do another one at some point.