Help Nominate Vince Hanoski as Milwaukee's Character of the Year

There's no doubt that Ben's Cycle owner, Vince Hanoski, is a one heck of a character.
If you've ever had the pleasure to meet him either in or out of the shop, you'll know that he treats everyone as if he's known you forever. He's constantly on the go, knows everyone, and will do anything to help out a customer.


He is definitely a Milwaukee character. And now, thanks to the Shepherd Express, we have the chance to make that title official.

The Shepherd is running its annual Best Of Milwaukee edition, and one of the categories is "Character of the Year." We can't think of any person who is more of a character!

So we'd really like you to vote for Vince here. We have until August 21 to nominate him.

You can write in as many categories as you'd like, and we'd sure appreciate a vote for best bike shop as well!

We asked customers and clients for reasons you should vote for him as the Shepherd's Character of the Year: 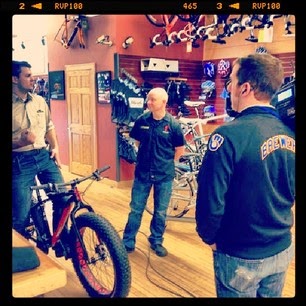 1. "Vince always takes the time to offer amazing customer service.  No matter how busy he is (and if you ask him, he's always busy). I'm impressed by the fact that even though he's the owner, he strives to always be there to help his customers."

2. "I had only been in the shop for a moment or two.  I had an appointment, and Vince felt I had waited too long and offered to buy me a taco from the restaurant next door!  Ben's Cycle is the only local bike shop that I will shop at.  Vince rocks!"

3. Of course the guy's a character!  No shop owner I know fabricates and welds up his own bike fixtures, run a kickass website, fixes customers flats, gets on his bike for some serious riding, then laces up the skates for a hockey game .  Vince does all that, and more.  And he always has some interesting story or event to talk about over a beer.  Absolutely he's a character.  My kind of bike shop owner!   Go Vince!

4. I love Vince and he is definitely a total character.


I brought in a used scooter that I bought for my daughter, and it had a kick-stand that was cracked.Vince took it to the back and welded it back together for me and completely fixed it. No job too small or out of the question.

I also really loved the time he took me on a tour of the internet stations upstairs and all the stuff crammed in all the nooks and crannies upstairs.

So go to the Shepherd's page and nominate Vince for "Character of the Year." And if you don't know how much of a character he is, stop in at the shop sometime at 1018 W. Lincoln to see for yourself!
Posted by Ben's Cycle at August 11, 2014